Tom had a bird on his balcony. The bird had a wife. Both birds he assumed had children in the birdhouse. He thought this because the male of the pair kept attacking the reflection of itself in the square mirrors Tom had placed under the balcony railing.

The female bird concerned for the welfare of her mate kept trying to keep it from pecking. But, it had been two days of the woodpecker sound and it was waking Tom.

Tom would pound on the window. He would wave his hands and eventually the bird would take off. But, it would always come back in minutes and hang from the mirror edges. It would peck at its picture. Tom figured the bird lacked the capacity to see that this was itself.

As Tom got older he too would stare back at the reflection of himself and say: “Who is that? (Good thing I am not married and have children.)”

The bird continued to hit the mirror. Eight days later, Tom saw a red liquid, perhaps berry juice, perhaps blood at 7:15 in the morning. He sprayed vinegar on the mirrors thinking it would deter the bird.

The paper Tom had attached a week ago had been pecked off and one of the pieces littered the patio of the apartment two floors down.

Despite the vinegar, the bird pecked. It sounded like it was tired.

The bird’s wife seemed to be on hand as usual chirping with a frenzied beauty.

It was quiet as the wind chimes clanged and tinkled ever so slightly. It made a sound likened to the birds’ chirping and yet it was less even.

Tom asked, “When would the bird understand that he cannot kill the bird reflected unless the bird itself has died?”

Then one faint peck was heard and the wife begged the bird with such beautiful consolation. But, the bird hit the mirror for a while. Its bashing was less forceful, less close in terms of timing as the bashing before it. Maybe its concussions were taking effect. And then there was silence as it must have moved on. Why was the female bird intelligent, and the male so willing to protect her, where she was clearly not in danger? Was he a ‘man’ bashing his head till he could think no more: Dizzy, damaged, and purposeless?

“I have a woman like this in my mind when I am facing my own shadow in the mirror,” Tom said, “Except she neither encourages nor discourages me. She is absent. She was gone long ago. She was not as loving as the bird. She recognized my affections as never-ending, claustrophobic, and permanent.”

“It was so many years ago,” Tom said, “yet there is the constant reminder.

“She affects all my other relationships because she is so beautiful. She is the key that fits my locked heart,” Tom said.

As he stood looking in the mirror, Tom concluded, “I never knew what she was thinking. Why did she contact me, and why is she gone?” 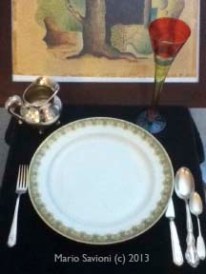 Dan, a busboy at the Savoy, met the famous poet Emily Dickinson yesterday. He met her before and praised her, like a grown up baby. “She looks like Brad Pitt’s girl Angelina Jolie, in a long black dress,” he said.

“She and a group of dignitaries were having dinner. She faced the window looking out at amber London. And the night sky was smoky. It matched her gothic presence. I got them wine. I was manic, bouncing around the table like a lap dog,” Dan said.

“And the people she was with were poised and strategic; they had some presentation they were discussing, like the order of the speakers, her new Pulitzer, or the transportation to the school since there might be traffic.”

“Her organizer complained,” Dan said, “that it was recommended that they leave the hotel 3 hours early and that they just sit there in the green room: ‘What would you have us do for three hours?'”

Dan was reminded of the hotel in Brazil, where the houseman pulled his victim into a storage closet and made love to her even though she had doodled on herself from fear. “One moment,” he said, “you have someone’s helping hand and in the next, you have his or her passion spilling onto you as a grasp of ownership.”

“I can remember him” Dan said. “In the courtroom, he was looking at her without remorse and she was unable to look him in the eyes.”

“They had cuffed him,” Dan said, “and they lead him out after the verdict was read. His attorney was a bumbling public defender with a dirty brown suit, but it didn’t matter. The rapist was still ‘in love’ with her and she was angry, paranoid, ruined, skittish, and tender.

“So I held back waiting to recite ‘1st Rain/Cry of Faith,'” Dan said, “as it ran through my brain as the only poem I’d ever tried to memorize but I always forgot lines while I recited them. And my colleagues would laugh and so would the other guests at the table, so I kept it to myself like a kitten in my vest while boarding an airplane that might eventually escape with a whine.”

“I went through the emotions,” Dan said, “just as the article said: You meet her and undress her and that’s how it always was, like animals in clothes, it is the first thing people want to do, except of course she’s only being kind because I am one of the hired help and I am pouring water. I can’t possibly know what a couplet is or a simile; because I am not like anyone she’d care to undress with her eyes.”

“The dinner goes on like this and I get more and more disgusted with myself,” Dan said, “recognizing my station and the impenetrable facts of what will inevitably happen. Sure enough she is the first to leave. I think that I’ll never see her again. I feel like the postman in Il Postino having to borrow a line of silence, as she becomes a memory. She grants me a sweet goodbye from a distance and I hold onto it like a magician’s dove but it gets away and I am standing over the group as if they dried up and their souls evaporated. My mind followed her around the corner and I imagined her speaking from behind the podium:”

“You left me boundaries of pain

“Capacious as the sea…,”

“And I am still trying to memorize those lines,” Dan said, “of the only poem I wanted to remember:

“The moon whose purple heart collides

“With savage curls of smoke.

“I breathe with tender stroking sighs

“The hour of my death, I cry

“In chambered thoughts of loneliness

“From miles away bewildering.

“But when I see the eyes of love,

“The evergreen meandering through forest tall

“And sycamore sails in the thunderous air,

“How fine this dance withholds the tears

“And rain will fall through leaves so still,

“And on these spikes become impaled.”

Dan knows that even as he has memorized the whole poem, the timing would be wrong for him to say it. Dickinson is gone and he was not equal in standing to the party’s patronage. He thinks of Duchamp’s toilet, where replicas are now on display in a number of different museums, and so, “A toilet is still a toilet.”

I fancy a walk with a particular woman,

How her face comes gracefully over her shoulder.

I continue to wait for her apology.

But, she still doesn’t get it.

She was in a relationship

When she wrote me

And I told her to do so when she was single.

Of course, I wrote back almost instantly

That it probably didn’t matter

But of course it did.

Relationships are about power

And that’s why she came to me.

Who was completely destroyed by it.

She’d often talk about how a married man was a prize.

Not because he was someone she liked,

But that it represented a challenge.

I figured it was because she was taking him away from another woman.

I thought to myself,

My sins were committed out of actual desire,

For her, relationships were a game;

She drove me crazy.

She never apologized and then blamed me,

Except that I was visiting my mother the first time.

My mother lived just down the street from the gas station,

Where the two of us stood.

She rushed to finish her fill-up.

I must have smiled,

But inside I loved her

Inside, I was sad.

She couldn’t see me

She couldn’t see anyone but herself.

Despite that I fancied a walk with her,

She would no longer have it,

Who was dangerous in my silence?

I was hoping she’d apologize to me,